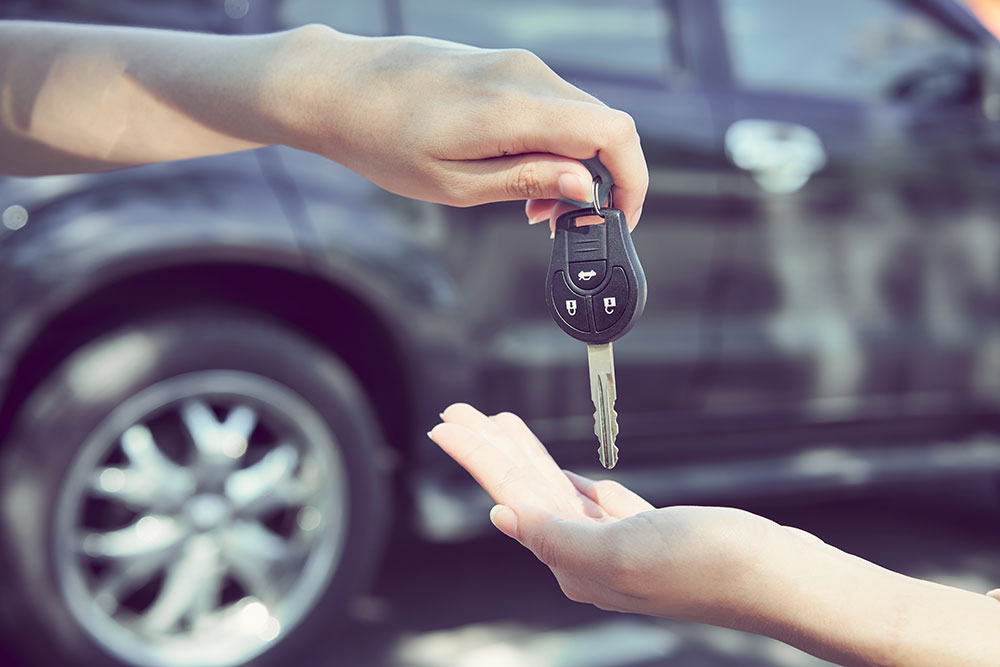 Car key technology has changed quite a bit in the last few decades. While older car keys could only engage the vehicle’s ignition, modern car keys come with a variety of abilities, from remote opening to transponder technology and more. While older cars do still use mechanically cut keys, smart car keys allow drivers to unlock or even start their car without setting foot into the vehicle.

Let’s take a look at the nine different types of car keys that are out there. Below, we discuss each of their features so that you can make an informed decision should you ever want an extra key made.

One of the most common car key types, the flip-style is also known as the switchblade car key. As you might expect, this type folds the key within plastic housing when not in use. Drivers simply push a button on the key fob to make the key flip out of the housing.

The compact, form-fitting design of the flip-style key has a lot to do with its popularity. Not only is this style convenient for use, but it reduces bulk for those who keep their keys in their pants pocket. Many drivers actually convert other types of car keys into the flip-style.

Laser-cut keys first came into use in the 1990s, primarily as an anti-theft measure for luxury cars. With this type of car key, a laser cuts both sides of the key, creating an identical cut on both sides and allowing for the driver to insert the key on either side. As you might expect, laser-cut keys are much harder to replicate. They’re also a fair amount bulkier than other types of keys.

Many but not all laser cut keys have a remote section to which the metal key attaches. Car manufacturers will typically insert a transponder chip here for extra security.

Out of all the different types of car keys, the master key is the most versatile. It can unlock the doors of multiple vehicles and also start the ignitions. Since people could potentially use these keys on cars not their own, laws exist to govern their use. Anyone who illegally owns a master key could face legal repercussions.

Most people with master car keys are either automotive locksmiths or similar professionals. With that said, criminals tend to seek out master keys because of the ease with which they can use them to steal cars. Some criminals have created ways to create their own master keys.

All types of car keys have their pros and cons, but professionals generally consider mechanically cut keys, also known as traditional car keys, to be the least secure type of key. For the most part, only older cars that don’t have advanced security still use this type of key.

Mechanically cut keys are generally only made of metal, so bad actors can easily make copies of keys without the car owner knowing.

While remote keys look similar to laser-cut keys at first glance, remote keys have more functionality. Remote keys have a replaceable battery in the key fob, allowing drivers to deactivate their car alarm and remotely unlock their car.

Remote car keys have a limited use distance, but that distance is generally enough for someone to unlock their car in their driveway without having to go outside their home. With that said, drivers still need to physically turn the ignition with their key for it to start.

Of all the different types of car keys, smart keys are one of the latest to hit the market. Also called keyless car keys, this type of key communicates with your vehicle, allowing you to start the car remotely with a single push of a button. In fact, smart keys don’t even need to be in the ignition while you’re driving.

Smart keys have many pros, but one of the major cons is that a smart key is expensive to replace. In some cases, car owners need to replace their entire car lock system when they lose their key because of the risk of someone finding and using the lost key.

Of all the types of car keys, the Tibbe key is one of the most unique. It’s a proprietary cylindrical key that Jaguar and Ford have used, comprised of six rotary disks that require precise positioning to allow a side bar to slot into the correct position. This unique shape makes it hard for criminals to duplicate it.

Even skilled locksmiths and hardware stores tend to have trouble duplicating these keys, which has made them quite popular with security-conscious car owners.

In case of replacement, a car owner will need to order a new Tibbe key and then hire a mechanic to program the new key to the car. Tibbe keys are less common these days, but they’re still quite secure.

Transponder keys have an RFID (Radio Frequency Identification) chip inside the key’s head. As such, transponders have become a standard way for car manufacturers to bolster security since their introduction in the 1990s. They come in many sizes and shapes. From smart keys to remote options and more, many distinct car key types use transponders in one way or another.

In general, any car made within the last twenty years will use a transponder in one way or another. You can even have a transponder key made for an older vehicle for added security.

Since valet keys open the car door and start the ignition but can’t access the glove box or trunk, these keys offer an option for drivers who want to hand a key to valet services while keeping the contents of their car secure.

For a Dallas-Fort Worth Locksmith, Call Us Today!

Do you need help with getting a new key made? Here at Action Lock Doc in Richardson, TX, we can help with all the different types of car keys that we’ve covered here. Give us a call at (972) 690-4431 today.