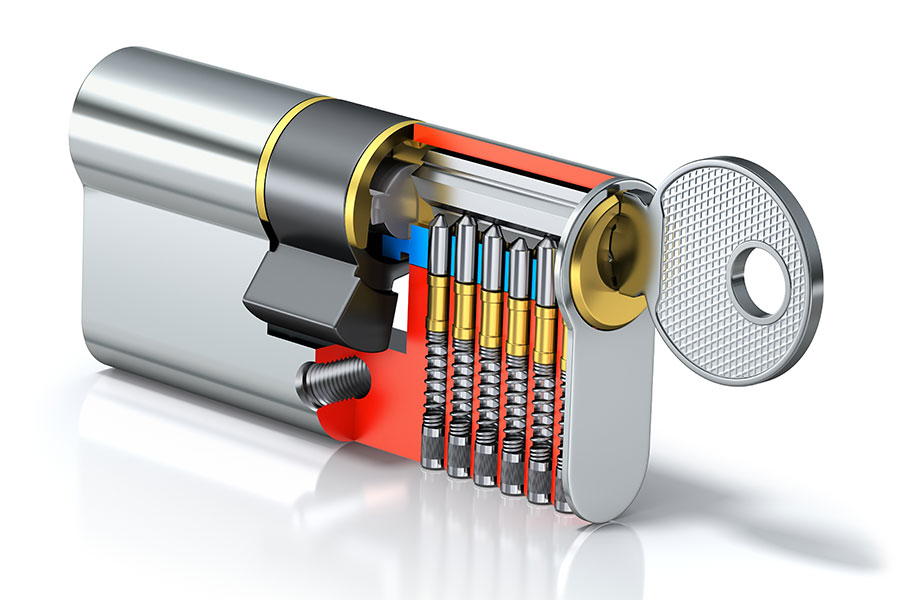 We trust locks to keep our homes and belongings safe, but most people don’t know much about how locks work. Because a lock’s mechanism is hidden, we can only imagine what happens when we insert and turn a key. There are many types of locks that work in different ways, but the most common is known as a pin-tumbler lock. Most doors use this type of lock.

In modern homes, entrances are typically outfitted with a doorknob or lever latch and/or a deadbolt. These two types of locks provide different levels of security.

A simple latch keeps a door closed while allowing it to open easily when you turn the knob or handle. However, a house that only has doorknob locks is relatively easy to break into. An intruder might be able to pry open a latch with a credit card due to the slight angle of the latch. Also, an intruder can potentially break off a doorknob or handle with a rock or hammer and remove the lock mechanism that way.

A deadbolt lock provides more security. For one thing, it works by inserting a squared bolt into the adjacent doorframe. The square shape prevents anyone from breaking in with a credit card or other tool for prying the bolt away from the frame. Another benefit of a deadbolt is that it is installed directly into the door rather than being housed inside a knob or handle. Thus, it is much more difficult to break off a deadbolt by force.

Despite their differences, both doorknob latches and deadbolts are examples of pin and tumbler locks. Both types of locks require a key that correctly aligns a series of pins to lock or unlock the door.

The Parts Of A Pin-Tumbler Lock

Even among locks that work in exactly the same way, there are variations in design. However, all pin-tumbler locks contain the following parts.

Keyway: When you look at a door lock from the outside, you see a keyhole, also called a keyway, cut into the center of a round metal part.

Cylinder: This metal part is called the plug or cylinder, and what you see on the outside is one end of a long cylinder that leans 90 degrees to the back.

Case: The plug is in the center of a much larger circular piece known as the case.

Shafts: Inside the case, a series of columns or shafts line up from front to back above the keyway.

Springs and pins: Each shaft holds a spring and at least two cylindrical pins of varying lengths, called the driver pin and the key pin.

Bolt: The bolt is perpendicular to the keyway, and when the door is locked, the bolt fits into a square-shaped hole framed by a metal strike plate.

How The Pin-Tumbler Mechanism Works

Variations On The Tumbler Lock

The lock described above is a linear pin-tumbler lock because the pin shafts line up from the front to the back of the keyway. Pin shafts can also be arranged in a circle, and this design is called a tubular lock.

Not all tumbler locks use pins, however. Wafer tumbler locks use spring-loaded wafers with parts that protrude either below or above the cylinder to prevent it from turning. When the key passes through the center of each wafer, the notches on the key raise or lower each wafer to the proper position so that the cylinder can rotate. Car ignitions and filing cabinets often use this type of lock.

Another type of tumbler lock is known as the disc tumbler or disc detainer. In a disc tumbler lock, the keyway enters the center of a row of vertical, notched discs separated by washers. A thin metal bar across the top of the row of discs prevents the cylinder from turning. However, when the notches on the discs are properly aligned, they create a space that the bar can drop into. This type of lock provides a high level of security.

Other Types Of Locks

In addition to tumbler locks, there are two other types of locks that most people are familiar with: combination locks and electronic locks. Neither of these types requires a key.

You may have used a combination lock for a school lock or a bike chain. When you turn the dial to each number of the lock combination, an inner cam rotates to align three notched discs. When the notches in the discs line up, an inner component can rotate and free the latch that holds the curved metal bar in place.

Electronic locks are triggered to open by some type of data, such as a passcode embedded in a magnetic strip or biometric data from a fingerprint or retinal scan. Because biometric data is impossible to replicate, it is becoming increasingly popular in the field of information security.

Understanding how locks work can help you choose the most secure door locks for your needs. Good locks are important for keeping your home and your family safe.